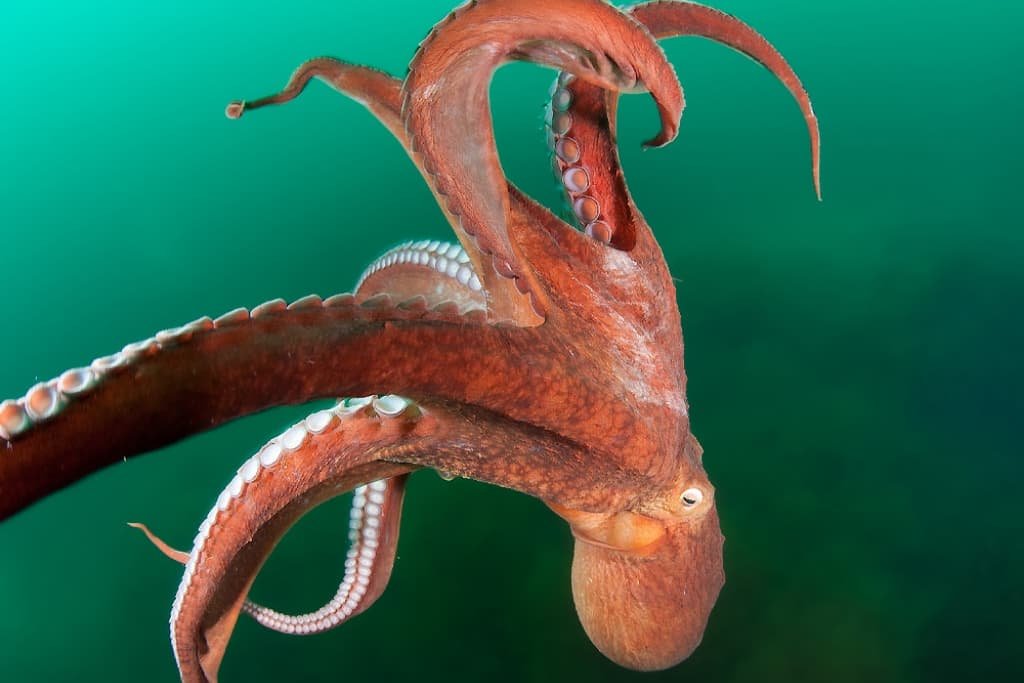 Octopus Symbolism- The octopus is a very wonderful and unique animal. As unique as it is, it holds a unique and special place in many mythologies and cultures as well. Not only that, but it also holds deep meanings in the world of religion and spirituality. Its symbolism finds its source in its way using which it uses its multiple arms to catch its prey. Figuratively speaking, the arms represent problems and their many aspects.

Octopus is an intelligent creature that is very well aware of its surroundings and is a very quick learner. The Kraken & squid symbol is associated with spirals, whirlpools, etc. Octopi medallions were used to be carried by seafarers for protection.

However, there’s a sinister aspect to the octopus as well. It all comes down to its ability to eject a pitch-black inky mass when it is frightened. In the North-West octopus is believed to be an evil creature and a powerful entity of the undersea (undersea is equivalent to the underworld). Shaman amulets depict these creatures as supernatural entities. Octopuses are also symbolized to be prolific catchers and hunters, thanks to their 8 arms.

There are plenty of Native American stories that were used to teach children about acceptable behavior. One such story involves the octopus. According to the story, the octopus was a woman with 8 braids. One day she was digging for clam at the beach when a man came to her. He started asking her questions and bothering her.

She paid no heed to him. But even then, he kept pestering her with the same questions over and over again. Gradually, while asking questions, he kept coming closer to the octopus. When he was close enough, her braid-like tentacles grabbed him and dragged him into the water. The man drowned while the octopus survived in the water. However, with the help of the man’s (disguised as Raven’s) wise cousin, the Crow, the villagers managed to save him on time.

However, the raven never went near the beach after that. Right now, fashion is a big thing in today’s world. The native American octopus bags and Athapaskan octopus smoking bags are making big fashion statements. 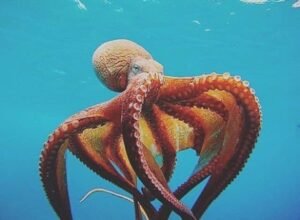 The Japanese depict octopuses in an often humorous way. The picture it with its tentacles tied into a knot and a surprised look on its face. For them, it is an important food and is used extensively in preparing one of the most popular Japanese dishes, sushi. However, it holds yet another meaning in the country itself. It is also viewed as a sex symbol in Japan.

In rural areas, octopus symbols are also used to treat whooping cough. Panama’s Kuna people believe that the Swastika symbol denotes the octopus that created the world. In China, the octopus has a rather political meaning. In 1952 the prevailing communism in China was figuratively addressed as ‘Chinese octopus’ by Casey.

In Christianity, fish symbolizes Jesus Christ. All the sea creatures are in one way or another, connected to the spiritual and religious meanings. Octopus is no exception. According to Christian legends, the Kraken is believed to be a great cosmic fish that disposes fish into fishermen’s nets. Only two of them will survive till the end and will create the world. Finally, they are believed to die at the end of the world.

Christian art paints octopuses to be intelligent, fluid, creative, and adaptable creatures. It is a lunar entity that represents creativity at the spiritual level. 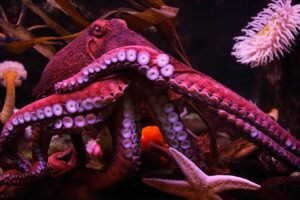 In many cultures, these octopuses are believed to symbolize the Aphrodite ad are connected with the Goddess Mother. As per Polynesian mythology, the octopus had two children, fire and water. It is also associated with the dragon. Octopus is also believed to represent the Celtic God of Nine Rays.

Africans depict octopuses as creatures with slow movement and determination. Octopuses are also believed to be the symbol of the sun. In his book, An Introduction to African Legal Philosophy, John Murungi used octopus to describe racism. Octopuses were found on coins during the time of Ancient Egypt.

It is also believed that the Mycenaean spiral and volute are close relatives to the octopus. During the Neolithic era, in Africa, the crude idols represented different forms of octopus.

People see all sorts of things in their dreams. From eventful things with some meaning to straight-up those things that make no sense. Dreaming of octopuses means something important many times. Let’s have a look at what different octopus dreams mean. 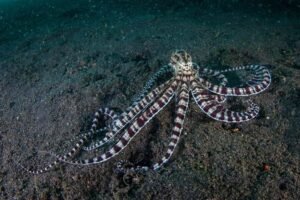 If you dream of an octopus attacking you, it is a clear indication that you must listen to your psyche. People who don’t listen to their inner self often dream such things. Even though octopus represents the number 8, which is a lucky number, it is unofficially deemed as the ‘cheat of the animal world’. Hence, dreaming about it indicates infidelity.

If your dreams feature an octopus, it means you have an adventurous soul. If you find one getting killed in your dreams or nightmares, then it means you’re taking on a moral stand.

Encountering one is very rare. However, these creatures terrify both the fishermen and sea explorers. Especially, the larger version of the octopus, a Kraken, is particularly fearsome. It is believed that Kraken is nothing but a species of giant octopus or giant squid. Even though there are extensive mentions of these creatures in legends and folklores, they are very real, unlike other folklore characters.

Scientists have had well-documented, though rare, an account of Kraken (or giant squid) sightings. One such sighting was in 1985 when a sea fisherman named John Ingham lost two of his large and strong crab traps. They were suspended by a thick rope. The traps were pulled into the sea by an 8-legged creature with such tremendous force that the rope gave in and the traps disappeared, never to be found again. 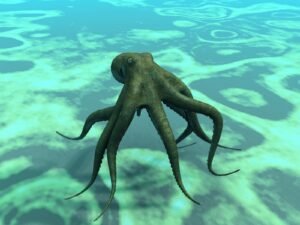 Fijian mythology has tales of an octopus goddess who defeated a shark god because he was trying to conquer her land. She se=queezed him so hard that he started begging for mercy. She decided to free him under one condition: he would forever protect her land from other sharks.

Jules Verne had also mentioned this 8-legged creature in his novel 20,000 Leagues Under The Sea. Moche Chiefs in Peru used to don headdresses depicting 8-legged deities. Celtic cultures depict octopuses having links to the dragon. According to Hawaiian mythology, octopuses are the only living beings from the worlds previous to ours.

Another interesting legend is that the sky and the Earth were separated by an octopus and a turtle so that the creation can continue.

Having octopus as your spirit animal shows that you are an intelligent human being. On top of that, you are very adaptable and possess the capability of blending in with your surroundings. You come with an added advantage of extreme flexibility as well. People with octopuses as their spirit animal are the masters in squeezing in through difficulties and grabbing opportunities just like an octopus gets in the fishermen’s trap, eats the fish, and gets away with it. They also depict regeneration and renewal.

If your totem animal is an octopus, then you are very likely to be a hideous person with a grasper persona. Your element will be water and your mineral will be brass. Such people tend to be quite emotional beings. When threatened, these people do either of the two things: withdraw or attack. With a volatile temper, they are the masters in grabbing opportunities that come their way. 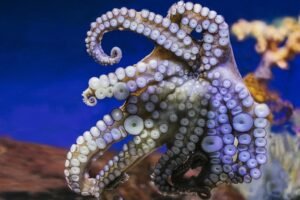 These people are pretty intelligent, and at times, quite manipulative as well. These people have two personas: one that is hidden from the world and one that is shown to the world. People with octopuses as their totem animal sometimes take on more than they can handle. However, they come with the added advantage of being highly flexible.

However, they are not immune to negative traits. They are very arrogant and stubborn. These guys can also be very difficult and demanding in nature. Your words can cut deep through other people’s hearts since you have a stinging sarcastic tongue.

If octopus is your power animal, then you have great intelligence when it comes to getting out of problematic situations. People with this power animal are often developers or creators or engineers. However, these guys are incapable of expressing their emotions properly. But, they are very flexible. Thanks to this flexibility, they can get out of any situation.

These people generally shine in any areas of skill, expertise, and research. However, they can be ruthless in the pursuit of their goals. Such people are very sexual too and are very organized and efficient beings, both in their personal and professional lives.

Octopus tattoos are extremely popular among sailors. They do so to pay homage to them. Women who have been bullied or abused durn=ing their younger days often get octopus tattoos. This is because this tattoo is a symbol of strength. It reminds the person that he/she is a survivor and is capable of easing his/her way out of harmful situations. 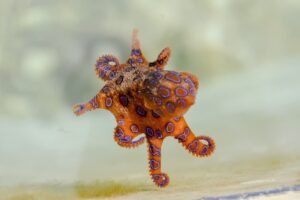 Octopus tattoos stand for many things. Some of them include strength, power, intelligence, adaptability, and much more. Octopus tattoo also indicates a person who is a grasper, who is often on the lookout for opportunities to come his way. However, before getting an octopus tattoo, carefully research its possible meanings and ask yourself why do you want to get it?