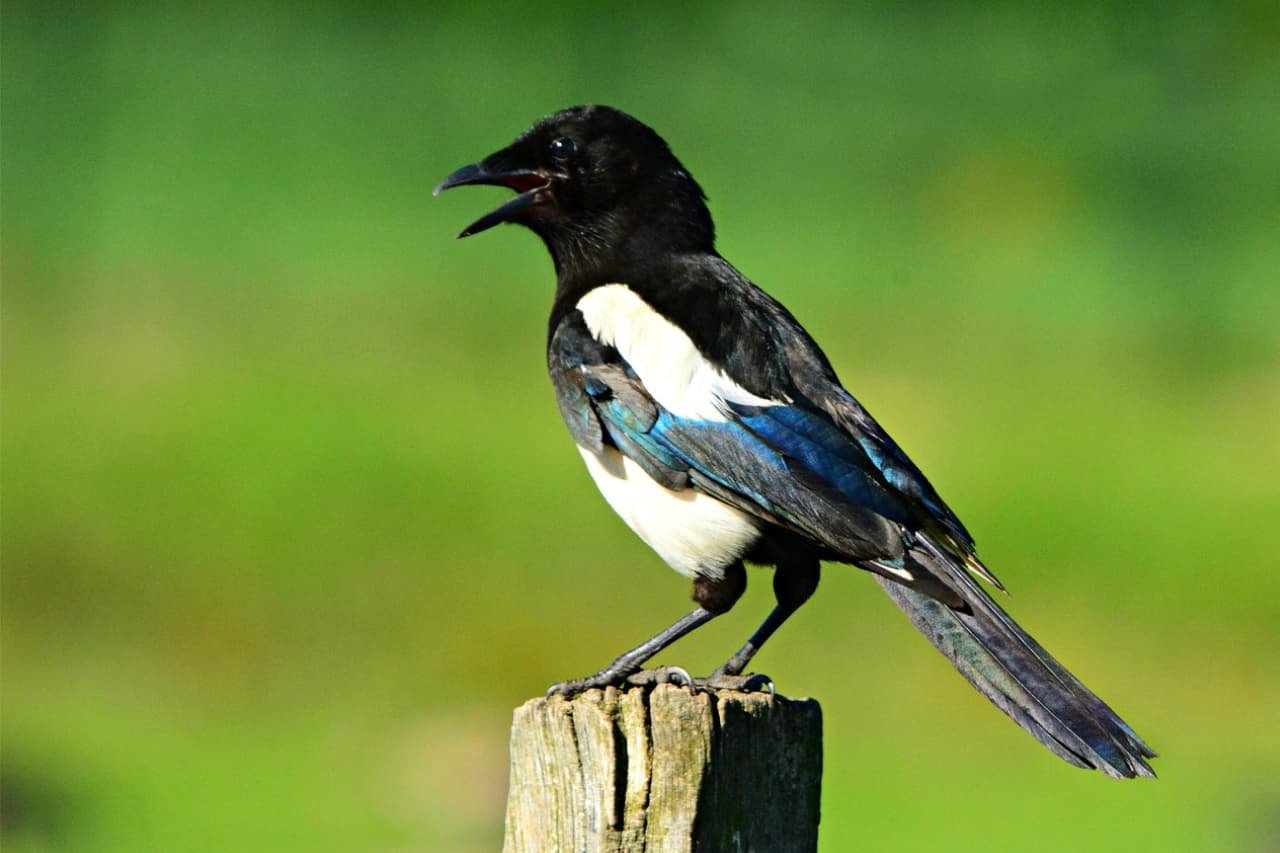 Magpies are one of the most charming creatures present on our planet. The Eurasian magpie ranks as one of the most intelligent creatures in the world that has the ability to recognize themselves in the mirror. Magpies belong to the ‘Corvidae’ family, so they also have a black and white plumage with a tail as long as their body. They lay approximately 6–9 eggs that are usually green or brown in color, although the plumage shines in the sun with a reflection of purplish-blue. 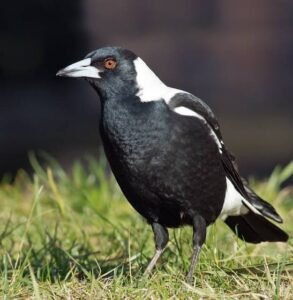 Magpies, like other birds in the Corvidae family, are omnivorous and feed on insects, nuts, berries, deer ticks, and small rodents. They are mostly found in grasslands, meadows, and dense forests in Europe, Asia, and North America.

Birds travel in groups to protect themselves from predators. Magpies also flock together for safety reasons. This collective group of magpies is called “parliament,” but there are many other names associated with a flock of magpies. Some of them are given below:

Popular Names of Group of Magpies

Do Magpies live in groups?

Different species of magpie have different kinds of behaviour all over the year. In the breeding season, magpies form pairs for breeding, and after that they either choose to fly alone or in flocks. There are mainly four types of magpies and they have different behavioural traits, some of them are given below: 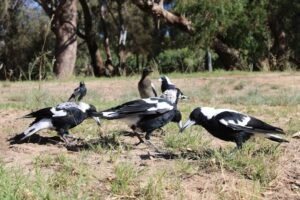 The Eurasian Magpie: They are most commonly found in Europe and they mostly breed after the first year. Their mating partner remains the same throughout the breeding season, and they are one of the rare categories of magpies who form flocks in the breeding season. The male magpies attract the female partners through various forms of visual and vocal communication during the breeding season. 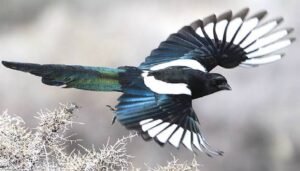 The ‘Taiwan Blue’ species of magpie are colourful birds with charming traits. They form smaller groups which involve only 3–12 birds, and it is observed that they fly in a line, which is known as a “long-tailed formation”. Their breeding season starts in March and ends in July. They build their nests on high branches of trees to protect their chicks from predators, although Taiwanese blue magpies are not afraid of the human species and are usually found in residential areas. 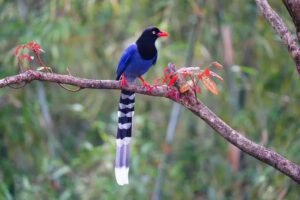 Black-billed magpies: They are also known as American magpies and are usually found in North America as they love to explore the environment around them and are usually found in open habitats. Therefore, you can easily spot them in suburban areas, farmlands, and open territories where there is a huge population of human species. As they are social animals, they are found in large groups, especially when the breeding season is over. In the breeding season, the male and female work together to build a nest in solitude.

Yellow-billed magpies: Yellow-billed magpies are also known as “California Magpies” as they are mainly found in California, they are extremely extroverted in nature. They form large groups or flocks that are codependent and usually fly in groups which are cooperative with each other as they depend on each other while roosting in the winter season. 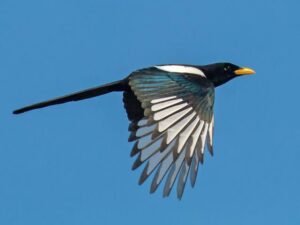 Why and when do magpies flock together?

Magpies flock together for various reasons, like roasting, feeding, and security. As mentioned earlier in the article, magpies flock together after the breeding season to share body heat with each other in the winter season while roosting. The young magpies also flock as they cannot mate in the breeding season and in their groups they try to find a suitable partner for mating. This group of young magpies is known as a “band”. In such large groups, they also find security and protection from predators. Together, they form communities and territories that are also known as the “Parliament of magpies.” 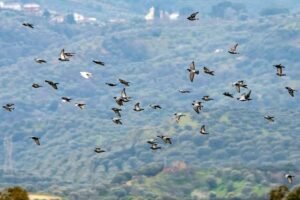 A flock of magpies also flies above dead bodies; hence, they are also known as “murders of magpies”. They belong to the ‘Corvidae’ family, where birds are often known for accumulating at funerals. These magpies gather around the dead bodies to sing together in unison before flying off, showing their emotional grief for the loss.

They are busy mating and building nests in the breeding season for a long period of time. They are ‘monogamous’ in nature, therefore they have the same partner throughout the breeding season. They remain aloof from the flock during this period after which they come together with the objective of feeding and roosting.

What does a group of magpies symbolize?

Magpies have been commonly associated with magic and mystery since ancient times. In ancient Rome, magpies were often associated with misfortune, death, and fortune-telling. They are also linked to black magic and witchcraft. Different cultures have different perspectives on magpies. In the bible, they are associated with bad luck and reputation because they didn’t sing a song for Jesus, while in China, magpies symbolise good luck and fortune. In the Pagan culture, they are considered intelligent and powerful. All the birds that belong to the ‘Corvidae’ family are usually associated with funerals and death. 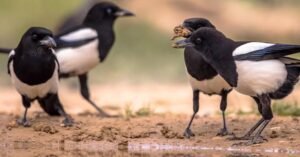 Are Magpies afraid of Shiny objects?

Magpies are scared of shiny objects and ornaments. Although there is no scientific study that supports this fact, it has been observed that many magpies have an innate fear of shiny objects like jewellery or ornaments, and they throw away any such thing that comes their way.

What do magpies eat?

Magpies can eat anything they find on the planet. The range of their food includes insects, grains, berries, birds’ eggs, small rodents, etc. 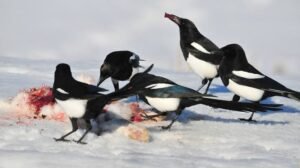 Are Magpies and Crows in behaviour?

Do you know magpies belong to the same species as crows, ravens, and jackdaws? Even though they look a bit different from the outside, they possess traits similar to those of the ‘Corvidae family’.

Is it true that Magpies are intelligent by nature?

A study was conducted by a few scientists where they placed a coloured mark on the necks of magpies. After that, they placed them in a cage that had several mirrors. It was observed that the birds were scratching at their necks. It was also observed that they could distinguish between their normal self and the color-marked self, which showcased their self-awareness and intelligence. This quality is usually not found in animals; they cannot recognise themselves in the mirror, nor do they have the self-awareness to do that. Very few animals have this ability, and magpies are one of them.

How many magpies are involved in one group?

Some magpies flock in smaller groups, whereas other magpies might flock in larger groups of 100–200.

What are the family dynamics of magpies in comparison to crows?

Why are magpies known as ‘a mischief of magpies’?

A flock of magpies is also known as “a mischief of magpies” because of their behavioural traits like dancing, stealing food, prancing, cackling, and disruption. Magpies are not just mischievous creatures, but they also have a darker side, which involves attacking birds’ eggs and nestlings. It is generally known as “mobbing”, which is a merciless procedure.

What is Group of Ducks Called? (Popular Name List)