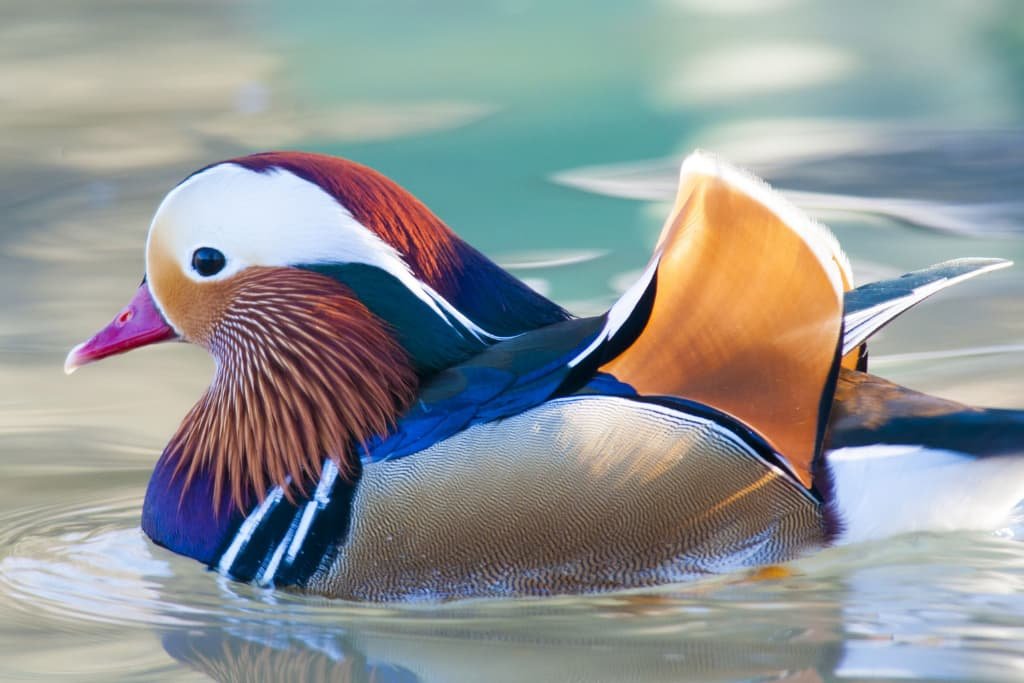 Mandarin Duck– It is the most beautiful duck in the world in comparison to other species of ducks.

They belong to the family – Geese, Ducks and swans.

If we talk about male mandarin duck, they have remarkable breeding plumage and also bushy orange side whiskers. They have an orange tertial(wing) feathers, which are large in size and in sail shape. Their Crown and forehead are greenish purple. The side of the head is white in color. Extended nape morph is present. The ruff is pale brown in color and the shoulders are blue and there is also some marking present on the shoulders. The back is olive brown while tertials are blue. The lower breast to the undertail is white and orange and the upper breast is reddish purple in color. The tail is brown with a green sheen and there is presence of long dark blue- green upper tail coverts. The beak is red in color and medium in length a look ‘duck like’. Their Eyes are brown and a yellow outer ring on the outer side of Eyes. Legs of Mandarin are webbed feet that are of pale brown orange. 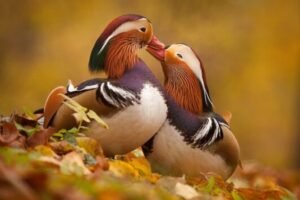 Adult females’ upperparts are dark grey brown in color. Female’s head is grey and have a greyish rear facing crest on the head and is shorter in size than the male’s crest. Underparts are generally white in color. When you see female Mandarin duck, you can notice a white circle around the eye which look like spectacles. Their feet are yellow. Females are generally dull in comparison with males.

Generally, both males and females are quiet and don’t ‘quack’. The male has a call which reserved for the mating season. Male sounds which consist of a whistling sound and also lower pitched snorting, they use this for alarm something. Females call with a single loud ‘ket’ or a rapid much-repeated clucking sound like ‘akk-akk’. 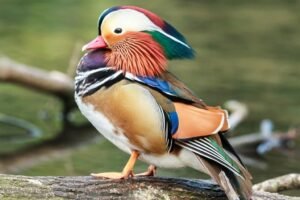 What does a Mandarin Duck Eat?

Diet of Mandarin Duck includes insects, plants, Snails, fish and tadpoles. They generally enjoy to dip their heads under the water on ‘upending’. They seldom dive for feed.

Where can I see Mandarin Ducks?

The majority of Mandarin Duck is seen in the central, eastern and southern regions of England. Mandarin ducks are generally not found in India. Some limited numbers occurring in Scotland and Wales. They usually prefer wet lands including Swamps, bogs, lakes or ponds where overhanging branches. Mandarin is a native of Japan and China and it can still be found in China.

The mandarin duck can perch in trees. You can easily identify male Mandarin duck. Females alone are far more difficult to identify when they are not with their mate. They normally eat in the early morning and evening. They can be found either forging in muddy areas or at the river bank. 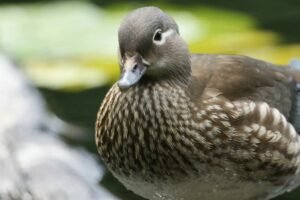 How does a Mandarin Duck breed?

They rarely built a nest in vegetation. They commonly use tree hollows. They lay between 7-14 eggs in the month of April or May and incubated by the female Mandarin around 33 days. Fledging takes place around 45 days. Mandarin duck generally breeds in Korea, Russian and north eastern parts of China.

How long do Mandarin ducks live for?

The life span of Mandarin is ten years. The maximum recorded lifespan is 15 years.