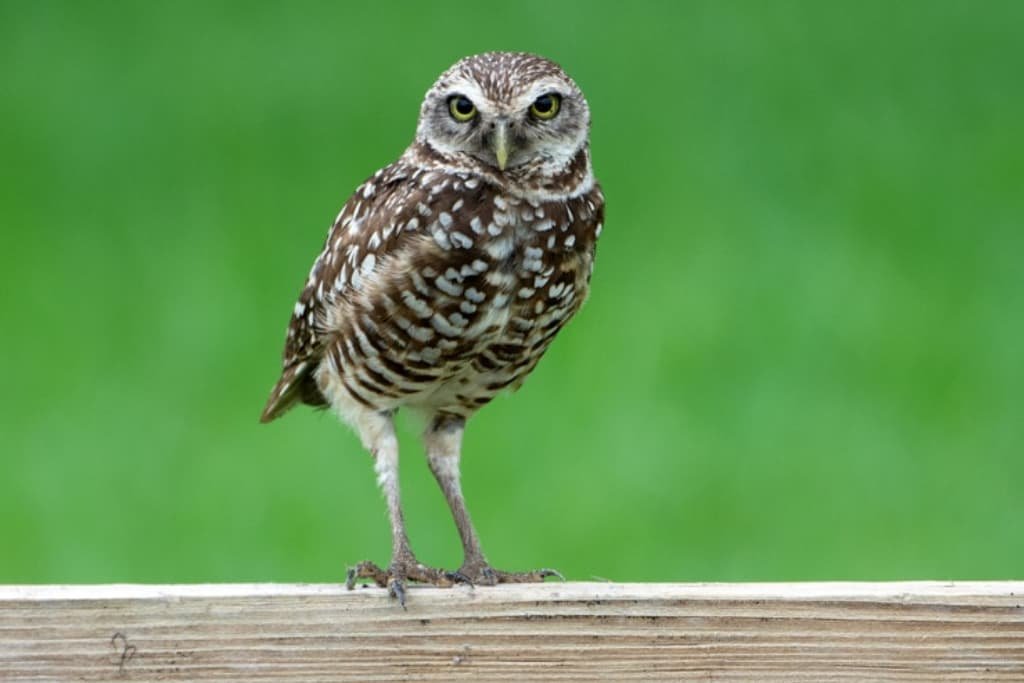 Owl legs- The beautiful species have been reported for their large, captivating eyes and the ability to twist their heads nearly 360 degrees – but somehow it turns out they have a secret quality which you likely haven’t heard about.

It may come as a surprise that the thick-feathered birds possess extremely long legs.

Pictures of owls with their legs exposed became widespread on the internet a few years ago. The photographs made quite a sensation among the non-ornithological (and possibly some of the ornithological) because many couldn’t believe how long the birds’ legs were.

How Do Owl Legs Appear?

When you look up an image of an owl’s legs on the internet, you’ll see a lot of images of individuals raising the feathers to reveal slender legs. The legs of an owl are taller than what most people think.

The legs of owls, on the other hand, are anything but skinny. Their large legs are used to house the strong muscles which allow them to hunt with such a firm grip.

The long shin and tarsal bone of an owl’s leg is a distinctive trait. It’s because of this that their legs seem to be so long. 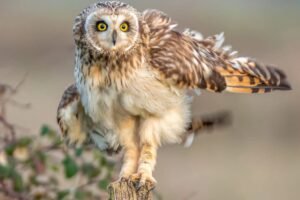 What is the length of an owl leg?

The length of the legs differs greatly among species. Several owl species possess feathers on their legs as well as toes to assist them sense when they have came in contact with prey and to shield them from the cold, which can contribute to the illusion. 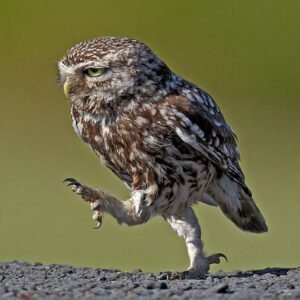 The barn owl, for instance, possesses long legs which aid in snatching prey from tall grass, yet they are thinly feathered, notwithstanding the species’ temperate habitat, to avoid becoming sodden while hunting in wet grass. Because grass owls in Africa, Asia, and Australia hunt in places with thicker foliage, their legs have grown to be even longer.

The snowy and eagle owls, which dwell in colder climates, have the thickest leg feathers of all, while fishing owls possess pretty bare legs to avoid getting soaked while hunting. 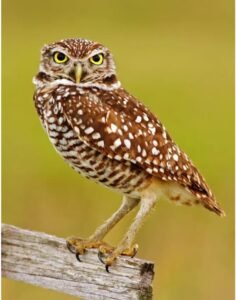 Every leg has four toes at the end of its tall as well as remarkably thin legs. Even though owls are classified as zygodactyls because they have two toes pointing forward as well as two pointing backward, the outer toe of every foot can turn to face either way. Whenever the owl is seated on a branch or hanging onto prey, it turns backwards, but once it is seated on a branch or clutching onto prey, it points substantially forward, protruding considerably out to the side. The owl, like some of the other birds of prey, uses a ratchet-like system in its foot to hold without having to flex its muscles.

An owl’s outer toe points forward during hunting, which is termed as anisodactyl, and its claws are split open to maximise the probability of a successful attack. To assist it acquire a good grip, the bottom of the foot is hard as well as boney, and the bony protrusions in its feet are tiny yet powerful to endure the pressure of prey hit.

Is it possible for an owl to cross its legs?

As previously stated, the majority of an owl’s legs are trapped beneath its feathers. The creases as well as lumps and bumps of their feathers may create the impression that they are sitting with their legs crossed whenever they are sitting. But that is what it is: an illusion.

Is it possible for owls to run?

The majority of owls attack from either the air or from a ledge, and they rarely sprint or crawl on the earth. Since walking reveals them to attackers, if you see an owl on the ground, it’s probably ill or hurt and in need of assistance.

The burrowing owl, which dwells on the grasslands of North and South America, is a very well exception. Since it prefers to prey in broad grasses as well as deserts rather than woods, it has evolved significantly longer legs which allow it to run and fly. It hunts insects as well as tiny rodents with its large, strong legs, racing after them. The added height also enables it see predators like badgers, foxes, raccoons, and skunks roaming the plains hunting for their next meal. 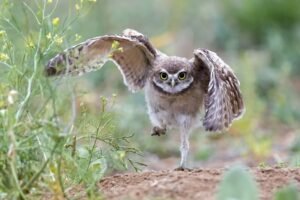 The burrowing owl, as its name implies, nests as well as roosts in burrows, and while it normally takes over the burrows of prairie dogs, squirrels, or tortoises, it can construct holes for itself through excavating the earth with its lengthy legs. In addition to fleeing, the burrowing owl uses a new defence to defend oneself. Once attacked, it will retreat to its burrow and make a rattlesnake-like rattling and hissing sound. This is an instance of acoustic Batesian mimicry.

Is there anything else we should be aware of?

Yes! The neck of an owl is likewise considerably longer as well as slimmer than it appears, but the long, thick feathers which cover it give it the appearance of being fat and short. Several owls appear to be devoid of a neck. Without moving its shoulders, an owl can twist its neck to swivel its head roughly 270 degrees in each direction or about 34% of a circle.

Since its head is just attached to one socket pivot, it is capable of doing so. We have two that limit our capacity to twist, and even if we did, we’d rip the linings of our arteries, perhaps causing clots and strokes.