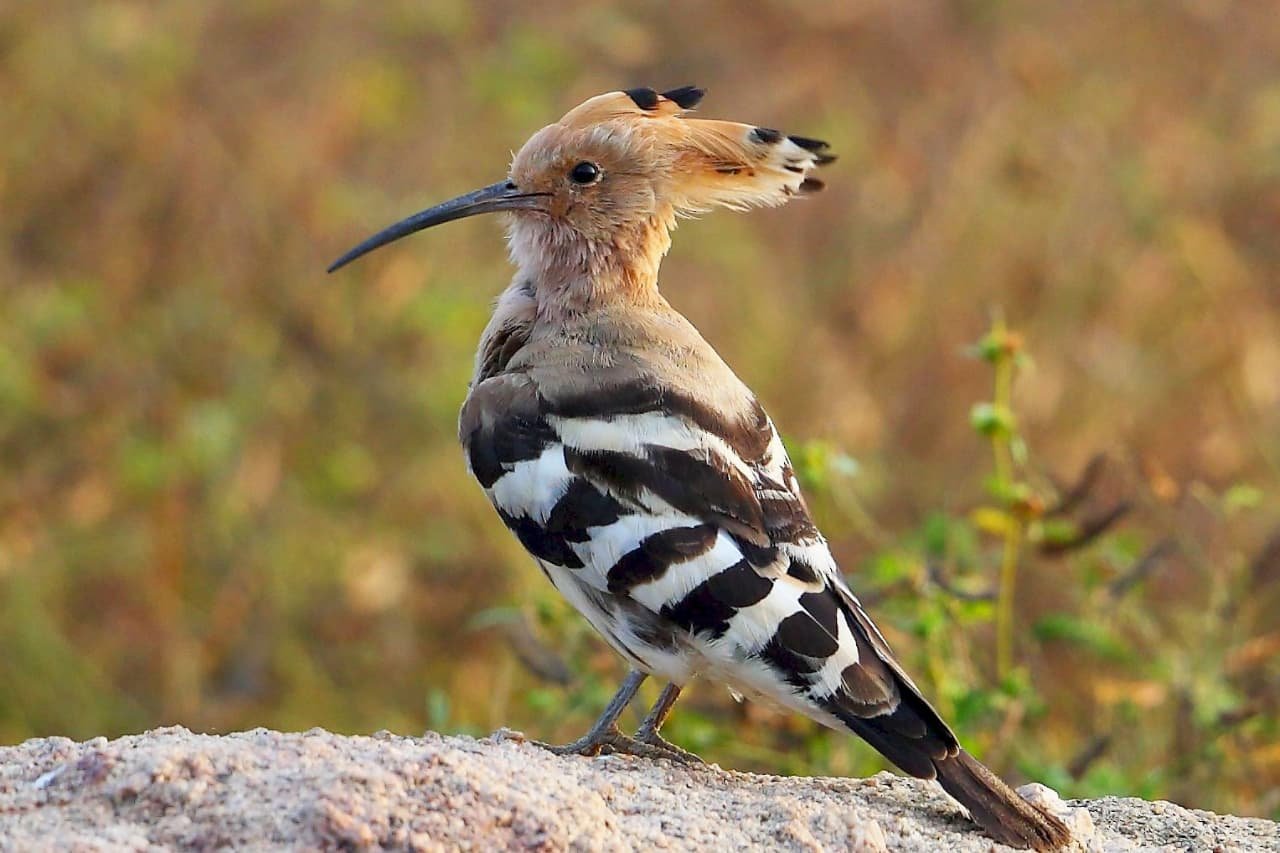 The Hoopoe Bird (Upupa epops) is a species of bird which is seen mostly in Africa, South Europe and Asia but scarcely in the United Kingdom. Their populations are stable and they are not under any threat at the moment according to IUCN’s red list of endangered species. They have been observed to sing at dawn and dusk using the same song with variations; so it’s quite common to hear them singing on different days in different ways as if no one else was singing the same song!

When a Hoopoe flies it’s body looks pinkish-beige brown in color. There wings are broad and rounded in shaped which has black and white stripes on it. A white colored band runs through its wing’s outer edge with wing tips that are black in color with a small rump white in color. When the hoopoe fully erects it’s head a pinkish-brown crest with black tips is visible. They have dark short legs which are curved slightly for grabbing food easily from the ground. It is difficult to spot a hoopoe when it is on ground. However, it turns into a beautiful bird during flight with several patterns on its wings which are closed half like a wave as butterflies. Juvenile birds are little dull in color than hoopoe. 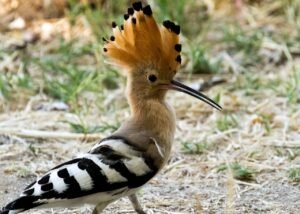 The bird has got its name from its sound as cuckoo. Hoopoe has a low and softly resonant sound like poo – poo – poo or hoo – hoo – hoo which it pronounces often.

Where do Hoopoe live?

As their name suggests, hoopoes can be found in Eurasia and Africa. The eurasian is more widely distributed; they can be found throughout Europe and Asia. They are quite hard to spot though, and would definitely go unnoticed if it weren’t for their loud calls.

Eurasian hoopoes live in a variety of habitats including deserts, grasslands, savannas and shrub lands. They’re also common inhabitants of agricultural areas and are often spotted among grain fields. They can live in cultivated areas without much trouble but need to be careful when nests or young chicks are in danger from people. If you see an adult with brightly colored feathers standing close to its nest, it’s likely that it’s protecting its offspring from human interference.

What does a Hoopoe Bird eat?

The hoopoe lives on food that is available on ground like seeds, insects, grubs, spiders and sometimes small sized frogs also. They also like to have berries occasionally. 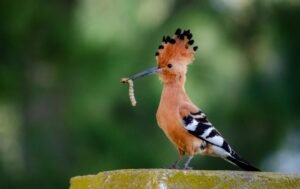 Hoopoes eat invertebrates, such as insects and their larvae, worms, small crustaceans, molluscs and earthworms. Hoopoes also eat small vertebrates such as lizards, frogs and fish. The majority of its diet is composed of insects and they have a tendency to be more carnivorous than other members of its family. In autumn large amounts of berries are consumed before migration which can make up 20% or more of its weight during that time

Why Hoopoe Bird beaks are black?

Hoopoes feed on insects, so it is likely that their beaks are black to absorb heat. They also eat bugs that are hidden under rocks and other hard surfaces, so it makes sense for their beaks to have a nice black tint in order to better see where they’re digging. What else do hoopoes have going for them? You will learn all about them in our hoopoe bird facts guide! 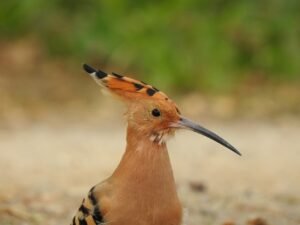 Hoopoes’ beaks are black because of magnetite in their diet. The black pigment comes from melanin, which is found in soil and helps them absorb more iron from food than other birds that have a diet high in cellulose but low in iron. This also helps them to compete for nesting sites with larger species of birds.

Why do Hoopoes feathers change color during winter?

The hoopoe is one of a number of birds that changes its plumage color during winter. It starts out life as an all black bird, but turns white and later dark grey or brown. The Hoopoe has to spend more time foraging in cold weather so it has less time to clean its feathers from parasites; brown feathers absorb heat better than black ones and make it easier for birds like hoopoes to keep warm during winter.

Hoopoes don’t migrate, but they’re known to move north or south with changing seasons. So, where you see a hoopoe in spring might not be where you see one in fall. In colder months, some northern populations will shift southward; in warmer months, some southern populations will head north. This could mean that a hoopoe could make its way to your backyard—or vice versa! Learn more about how to attract hoopoes here . 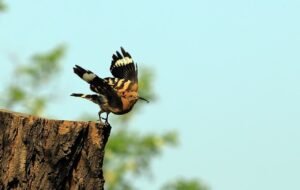 Sadly, no. The Eurasian Hoopoe is categorized as Least Concern in its natural environment due to their widespread distribution across Africa, Europe and Asia. In many European countries such as France, Germany and Switzerland they are considered a pest by farmers due to their eating habits but they are also revered for their mystical beliefs. In China, however, these birds are known as the Royal Bird because it was said that when an emperor died his soul would be reincarnated into a hoopoe.

The Eurasian Hoopoe is common in its range and has a large population, so it is evaluated as Least Concern on The IUCN Red List of Threatened Species. However, their numbers are declining in Western Europe.

Where can I see Hoopoes?

Hoopoes are not really found breeding in the UK. Not more than 1q00 birds migrate to UK from Saharan Africa during the months of April and May. Before moving to their breeding area i.e. South Europe they remain single and rest and feed themselves near southern coast of England. They return to Africa in the months of September and October. In the entire Europe, Spain has the highest population of hoopoes. 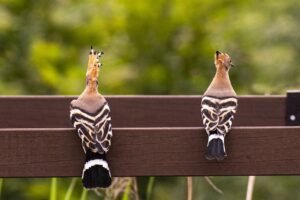 While hoopoes are on ground while feeding they are difficult to spot between long grasses and hedges. However, during flight they are spectacular specially during spring sunshine. They raise their crest which is fan-shaped during the landing process for few seconds. For their nests they choose vertical holes, cliffs, trees or walls. They like to sunbath while they are on the ground.

How does a Hoopoe Bird breed?

Hoopoes less often breed in the United Kingdom. As per reports in the past two hundred years only 10 pairs have bred on the shores of United Kingdom.

The Eurasian Hoopoe breeds in open country in south-eastern Europe, north Africa, and Asia. These birds are migratory and will move south or to lower ground in winter. They nest on cliffs in small colonies up to about 10 pairs. 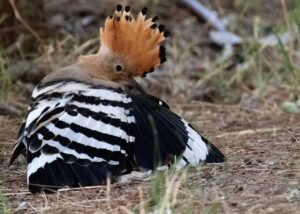 The female Eurasian hoopoe builds a small grass nest in an acacia tree, then lays between 3 and 7 eggs which she incubates for around 20 days. When they hatch, both parents take it in turns to feed their chicks until they are strong enough to find food for themselves, after which they leave their nest and begin living on their own.

How long do Hoopoes bird live for?

The Hoopoe lives a life which ranges from 5 to 10 years.

Baby Pigeons: All The Facts, Care, And Pictures