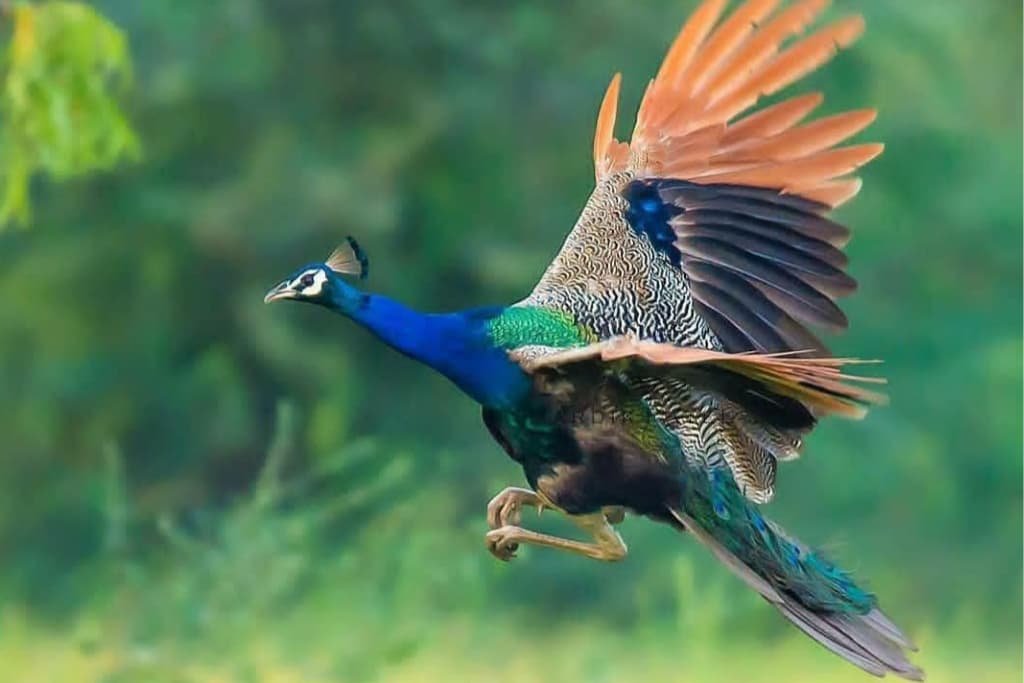 Peacocks are huge, gorgeous birds whose feathers are noted for their beauty. They are all members of the Peafowl family, which includes three kinds of peacocks. Do, and can, peacocks actually fly? Peacocks are almost always seen wandering around and strutting their business on the ground.

Peacocks can fly, although only for short periods of time or over short distances. A peacock’s ability to fly for more than a mile is quite rare (1.6 km). Peacocks rarely fly unless they are forced to do so to avoid danger or threats, cross obstacles such as rivers, or roost in trees at night.

Peacocks can fly, but not in the same way that most of their avian counterparts can. The average peacock spends only 2% of its time in flight, and they aren’t very graceful birds in flight. Their specific perception of flying, like that of other flightless birds, is related to the precise circumstances of their environment. Unlike most flying birds, they do not utilise their wings to migrate or swoop down on prey. Instead, flight has evolved as a secondary navigation tool, with their feet serving as their primary mode of movement. Their talons allow them to reach speeds of up to 15 miles per hour, and their claws can serve as a vicious defence mechanism against predators. 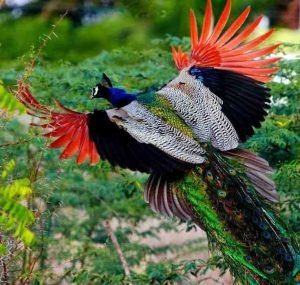 Why aren’t all peacocks able to fly?

Domestic peacocks often have their wings cut, preventing them from flying away.

Peacocks, even with their wings clipped, have a remarkable capacity to jump up to 8 metres in the air.

This means that if you keep peacocks in captivity and don’t want them to escape, you’ll need high fences to keep them contained. Peacocks kept in enclosures for a short period of time quickly learn to return to them for roosting and eating; nevertheless, neighbours may not enjoy them roaming around because they can make quite an amount of noise and trash.

Peacocks have a unique way of flying.

Peacocks have extraordinarily long tails, but their ability to fly is unaffected. They virtually vertically propel themselves into the air to clear the trees at heights of up to 8 meters. They quickly flap their wings with forceful and loud wing beats once they’ve reached an appropriate height

Peacocks are adept at avoiding obstacles once in flight, thanks to their agility and ability to twist and twirl in the air. In flight, the tail spreads out in a fan form. During flight, the neck is also straightened. Peacocks have a unique way of flying. 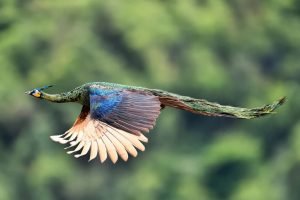 What is the maximum distance that peacocks can fly?

Peacocks are huge birds with limited flight ranges of less than one mile. They have muscular legs, which means they can walk a long distance. They usually travel 3 to 4 kilometres every day, hunting for food on the ground rather than flying for it.

This isn’t to say they won’t fly short distances in pursuit of food; they do so from time to time, but they prefer to stroll.

What is the maximum speed at which peacocks can fly?

Peacocks can fly at rates of up to 10 miles per hour (16 kilometers per hour). 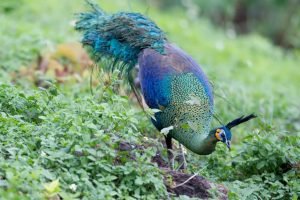 When do newborn peacocks learn to fly?

Because their flying feathers develop very early, baby peacocks can fly as early as a few days old (typically around 3 days old). They do not, however, until a few weeks following this since they may damage themselves or fall when they are young.

Female peacocks can also fly up to roost at night to avoid predators and to obtain food, but they do not fly far because they spend most of their time hunting for food on the ground.

Peahens do not have lengthy tail feathers like male peacocks and are about half the size, but they do not fly as far as peacocks.

A muster is a gathering of peafowl.

Peafowl often dwell in groups of a male and three to five females during the breeding season, and outside of this period, groups are commonly made up entirely of peahens and chicks known as peachicks. 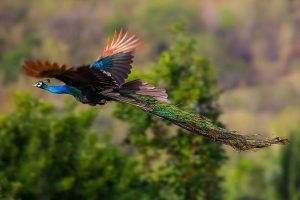 Can Peacocks Fly a Long Distance?

Peafowl refers to both peacocks and peahens, which are members of the Phasianidae family of birds, which also includes chickens, turkeys, junglefowl, pheasants, partridges, and quail.

This family of birds is not known for flying far due to its bulky form, but they do have powerful legs for running.

There isn’t much data on how long peacocks can fly, but peacock caretakers say their birds can fly for a mile or so.

Peacocks would reach a great ledge and generally use this as a place to launch for a long elegantly glide a long distance with some wingbeats to sustain the flight.

Peacocks have to fly to avoid predators, particularly at night when they roost in trees, and to find areas to hunt for food. Leopards as well as tigers, and mongooses plus stray dogs, are natural predators of peacocks in their native countries of India, Sri Lanka, Burma, and Java. Roosting in trees at night keeps them out of sight of predators, and the disturbance of the tree and branches if a predator tries to ascend the tree gives them time to fly to another tree.

Peacocks spend the majority of the day on the ground searching for food, but they will fly short distances in pursuit of insects and other delectable goodies. Peacocks eat insects, seeds, reptiles, and amphibians and are not picky eaters. Their delicate but powerful feet are ideal for clawing through fallen leaves and even killing snakes like cobras.

Peacocks hunt ground-dwelling insects such as ants, termites, crickets, and millipedes, so they do not need to catch them while flying.

Because all of the food they require is on the ground, peacocks do not need to fly for food and instead spend their time scratching around during the cooler periods of the day.

Peacocks live in Asia’s woodlands and woods and do not move because their diet consists of insects and seeds that are available all year. Most birds in the same family as peacocks do not migrate, owing to the fact that they are a family of hefty and massive birds, making long flights impossible.

Peacocks can travel several kilometers in a day in search of food, but they do so mostly by walking.

Despite the fact that peacocks do not migrate, they have been introduced to numerous nations across the world, where they have grown feral and roam freely. 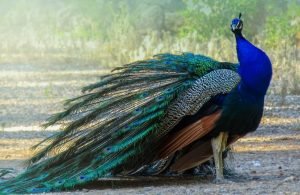 How to Keep a Peacock from Flying Away

Peacocks raised as pets will still roam many kilometres in search of food during the day, and they may roost in trees distant from home at night. Peacocks’ wings can be clipped to prevent them from flying away, but they can still jump up to 8 feet off the ground, therefore a proper fence would need to be constructed to keep them from jumping over and wandering for miles. They’d still need locations to sleep off the ground at night.

Peacocks will know where ‘home’ is if they are confined in an enclosure for several weeks before being permitted to wander and will return if they are fed daily. However, that could be after they have visited numerous surrounding properties, and your neighbours might not appreciate the mess and noise these birds can produce!

Peacocks are among the world’s largest flying birds.

Peacocks have been mentioned as one of the largest flying birds, though not the largest, such as Storks, Cranes, and Albatrosses.

Peacocks have been observed running through places at speeds of up to 16 kilometres per hour. Engage in quick chases and courtships, all on foot across large distances.

What is a Group of Peacocks Called? All You Need To Know