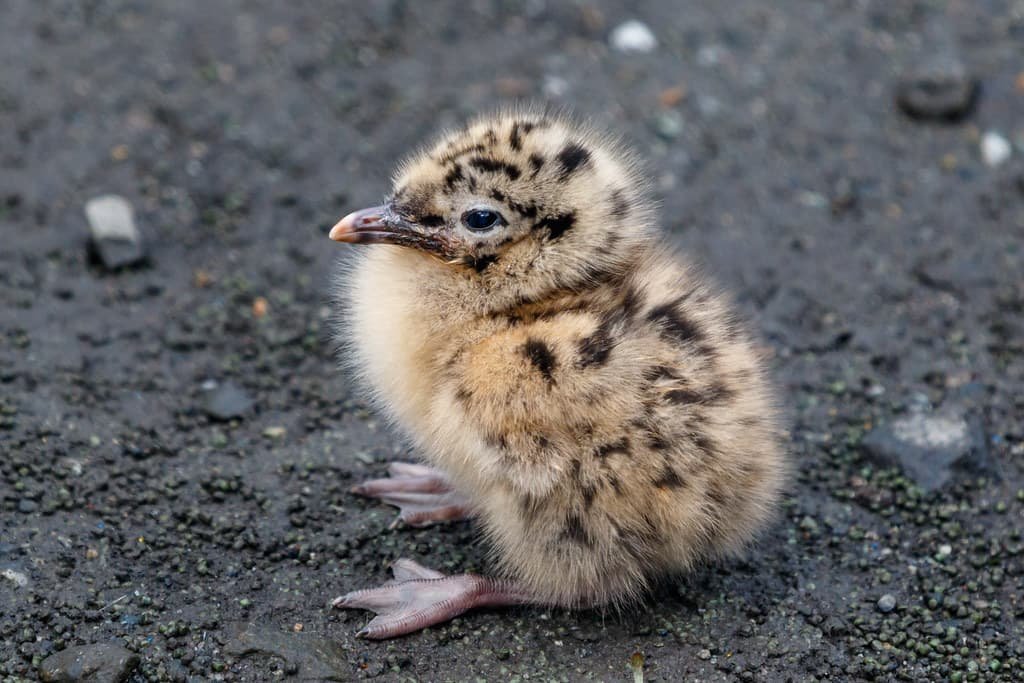 Gulls, or seagulls as they’ve become popularly known, are a common sight in many parts of the world. They can be found on every continent, even the High Arctic and Antarctica!

Despite the fact that seagulls are so common and plentiful, baby seagulls are a relatively uncommon sight. This article will cover everything there is to know about newborn seagulls, including plenty of images of them!

What is the appearance of a baby seagull?

Baby seagulls are recognized for being fluffy and adorable. Because there are 54 species of gulls, their appearance varies, but most seagull chicks are clothed in a soft speckled or mottled brown down that is dense and fluffy.

They can have speckled heads, but they usually have spots or mottles all over their bodies. 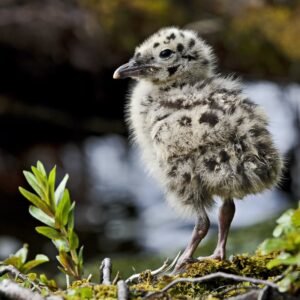 However, this varies. Baby Kittiwakes have mottled grey wings and are significantly more white or grey than brown. Most gull species’ chicks, on the other hand, look very identical, with only minor differences in size, coloration, and proportions.

What is the size of a baby seagull?

It is very much dependent on the species. The Little gull is the smallest species of gull, with a body length of 30cm, a wingspan of 61 to 78cm, and a mass of 68 to 162g.

Even if they appear to be the same size, these species’ chicks are likely to be vastly diverse in size!

There isn’t much information about the sizes of various gull chicks, however based on egg sizes, most seagull chicks are approximately the same size as a duckling. Of course, this will differ; for example, little gull chicks will be small. 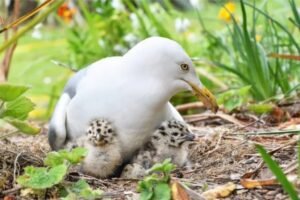 What is the weight of a baby seagull?

The weights of baby gulls are inconsistently recorded. One study looked at the weight of Herring gulls at five days old and concluded that the mean weight was around 50 grams.

The weight of many medium to large gulls, such as the Herring gull, Common gull, and Lesser Black-Backed gull, is probably around fifty grams. Smaller species of gulls will be considerably lighter as there’s plenty of size and weight variability between different gulls.

What are the characteristics of young seagulls?

For the first year of their lives, juvenile seagulls are mostly brown or mottled grey, with shaggy, downy feathers covering their bodies and necks.

These flecks fade as more white and grey emerges in their second year, especially on the upper wings. The colour of the beak begins to alter, becoming more pink-yellow in appearance.

Gull heads begin to transition to their adult colour, which is usually white, during the third year. The brown plumage fades to grey and white. The juvenile’s beak will turn yellow in several species.

What is the name of a baby seagull?

Gull chicks are the common name for baby seagulls. They don’t have names like owlets, eaglets, and so on.

What do you name a group of baby seagulls?

Gull parents are fiercely protective of their chicks in their early days, refusing to allow them socialize with other baby seagulls. This process continues until the bird fledges and joins a flock of seagulls, where it is often joined by additional juveniles. 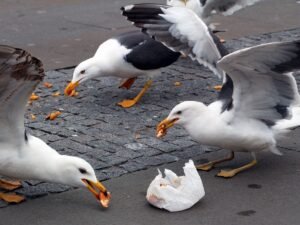 This can take a long time, and extremely young gulls are frequently seen alone and solitary for a period of time before joining a bigger flock of mature birds.

A colony or flock of adult or juvenile gulls is commonly referred to as such.

What do seagull chicks eat?

Baby seagulls consume whatever their parents feed them, which might be anything! The parents will regurgitate the majority of this food.

Gulls are uncomplicated omnivores who eat everything from human waste to fish and plant debris. Their basic diet is mostly determined by the types of food available in their surroundings.

The chicks are fed 3 to 6 times a day by both gull parents, which isn’t very often compared to most other birds.

Foods comprise everything the parents consider soft enough for the chick to eat, which contains remnants of soft or water-sodden foods and also undigested food as well as thrown back meals.

How do seagulls nurse their chicks?

Both seagull parents normally feed the chicks, giving them soft scraps as well as rehashed food. The chicks will call for their parents almost continually for the first week or two, and they will return at various times of the day to feed them. Regurgitative feeding lasts at least until the gull baby is ready to leave the nest, which usually takes 5 to 6 weeks.

Parental feeding does not stop when the gull chick fledges in some species, such as the Herring gull. Herring gulls may feed their post-fledgling babies for another two months or so, and the fledglings can spend much of the year with their parents.

What are the characteristics of seagull eggs?

The majority of gull eggs are olive, green, or browny-green in colour. Some species have browner eggs, while others have greener eggs, but they all have a similar appearance and fit in well with their mossy or rocky habitats. 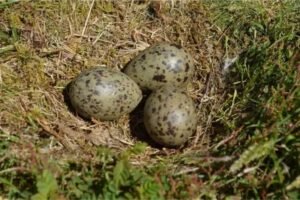 Sites where gulls build their nests

Sea cliffs, sand dunes, islands off the coast and inland, and other inaccessible areas are all traditional nesting sites. Roofs have been successfully adopted by some smaller black-backed and herring gulls for breeding.

The nest is a well-built cup consisting of grasses and twigs. In May and June, both sexes incubate a clutch of two to four eggs for up to 30 days. Both parents feed the chicks as they hatch, which are completely covered in down. With the exception of the kittiwake, the chicks leave the nest when they are only a few days old and move to the relative protection of neighboring foliage. They are cared for by their parents until they fledge after five or six weeks, and then for a while after that.

Gulls are long-lived birds; the larger species do not begin breeding until they are four years old, and some can live well into their twenties. 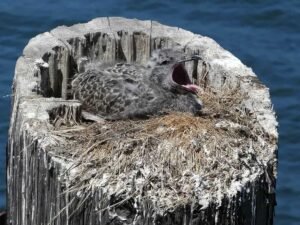 The state of conservation

The kittiwake is the most abundant of all the UK gull species, with about a third of a million pairs. The populations of herring, lesser black-backed and black-headed gulls are all over 100,000 breeding pairs, whereas the others are much smaller.

All seven breeding gull species are vulnerable to extinction. Due to serious reductions in its national breeding population, the herring gull is now red listed. The other species are listed as amber for a variety of reasons. The Mediterranean gull is the only species that is not currently falling in numbers.

What is causing the decline of gulls?

Kittiwake populations are diminishing due to a scarcity of their favorite prey, sand eels. Climate change is regarded to be the driving force behind this.

Other species’ reductions are unknown; however they could be caused by changes in their maritime environment, such as pollution or changes in commercial fishing techniques. It is critical to do research to determine the reasons of these reductions so that solutions to reverse them might be devised.