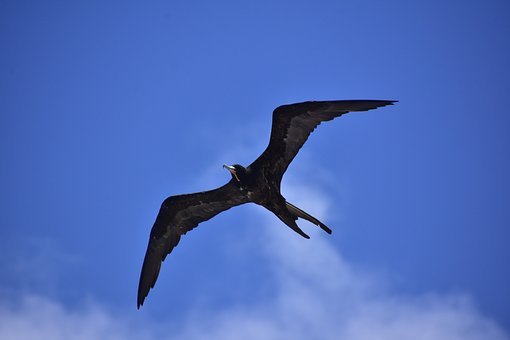 Magnificent, Great, Ascension, Christmas, and Lesser frigatebirds are the five types found in the world. Due to their enormous wingspan, they can spend weeks soaring over the ocean searching for food. Two types of frigatebirds are found in the Americas’ tropical regions; the Magnificent and the Great. If you’ve ever seen one in the sky, you might have wondered, “how big is a frigatebird?” Do you want to know? Keep reading.

The magnificent frigatebird has the highest wingspan-to-body size ratio of any bird and is the largest of the five frigatebird species. Their massive wingspan of up to 2.4 m (7 ft 10 in) allows them to glide effortlessly over the ocean in search of prey below.

All frigatebird species, with the exception of the much smaller Lesser frigatebird, can have wingspans greater than 2 metres (6 ft 7 in). At the very least, this can be twice as long as its body. Because of their massive size, they can intimidate smaller hunting birds into stealing the fish and squid they have caught in the ocean for themselves, a behaviour known as kleptoparasitism. Because of this, they are also known as “pirates of the sea” or “man o’ war” birds. 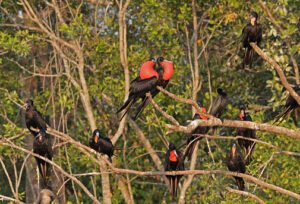 Females of all five species of frigatebirds are up to 25 percent larger and heavier than males. In all cases, males are lighter than the highest reported female weight. The following are the typical weight ranges for each of the five species:

The enormous wing area of all five species of frigatebirds allows them to effortlessly glide for great distances over the ocean. When compared to its body size, the Magnificent frigatebird’s wingspan is the biggest of any bird. Below, you’ll find a list of the species’ typical wing span ranges.

How big an animal can a frigatebird can catch?

Frigatebirds cannot catch prey with their feet because they have webbed feet instead of sharp, grasping claws. Only huge fish, squid, jellyfish, and small seabird chicks are suitable for transport in their beaks.

Famous for its kleptoparasitism, frigatebirds annoy other birds in the sky until they drop their catch, which the frigatebird then picks up from the water’s surface. 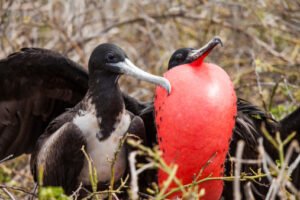 How big is the Frigatebird?

Each species of frigatebird has a relatively low body length compared to its enormous wing span. The following tables show the typical sizes of these animals:

No instances of frigatebirds taking up humans have ever been documented, and the bird’s weaker body mass makes it difficult for it to raise even a light toddler. We need not fear getting kidnapped by a frigatebird because they avoid humans and would much rather soar over the water than on land.

Do Starlings Migrate? Everything You Need to Know

What do you call a Group of Magpies? (Popular Name List)

How To Tell the Difference: Male vs. Female Ospreys