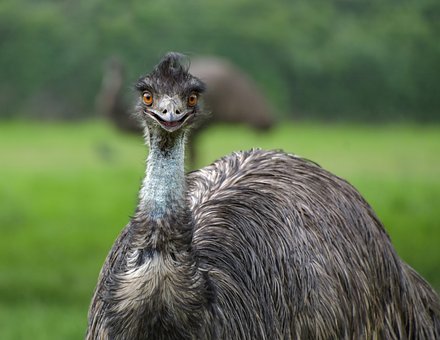 Cassowaries and emus belong to the Casuariidae family of big, flightless birds. The emu is the third-tallest and fifth-heaviest bird in the world, behind only the ostrich and the cassowary.

The beaks of emus, while broad and robust for grazing vegetation rather than shredding meat, are not exceptionally tough. In such a scenario, the question arises Is an emu dangerous? It is a ferocious foe for everything that crosses its path.

Like many other birds, Emus may be very possessive of their territory during the breeding season. They will attack humans if provoked but usually only cause minor injuries. Ostriches and cassowaries are more commonly associated with attacks and rare fatalities, but emus are not as violent or dangerous as these other species.

Falling off a horse is more likely to kill you than any of Australia’s deadly and sometimes terrifying fauna, so the saying goes. Although emus are not to be trifled with, they are not particularly dangerous until provoked. 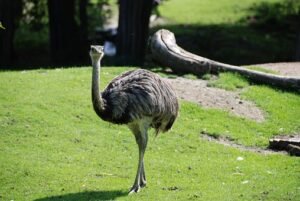 Can Emus bite be dangerous?

The few accounts we have of injuries sustained from Emu assaults are almost always the result of kicks rather than bites. The emu’s feet are strong, and its claws are sharp, but its bill is very gentle.

Plants make up the bulk of an emu’s diet. While they can easily tear tough plants from bushes, they don’t need bills that are extremely sharp or hard to meet their nutritional needs. Thus, you need not fear an Emu’s bite if you ever find yourself in its clutches. This is the jolt you should be worried about!

When does Emu get aggressive?

Like most other animals, Emus are more inclined to act aggressively when threatened or provoked. As a result, assaults on people typically occur after the bird has been startled, such as by a loud noise or surprise.

For instance, an Emu at the Fraser Coast Wildlife Sanctuary in Oakhurst attacked a man after being scared by a passing train. To avoid a possible dangerous encounter with wild Emus, avoid sneaking up on them or doing anything else that might startle them. Keeping your cool and giving them space usually prevents them from becoming hostile. The majority of zookeepers will tell you that emus are tame birds that require a lot of aggravation before they will attack. During the mating season, female emus are more aggressive and dominating than males.

Since the Emu can’t fly, other birds usually avoid getting too close to it, and if they do, it’s not hard for them to get away! Like most other birds, Emus are hostile when their offspring, nest, or eggs are threatened. As a rule, though, they are not hostile against other species of birds or mammals.

Can emus be friendly towards humans?

Emus are typically mellow, submissive, and quiet when interacting with humans. They tend to follow humans around, spying on them from a distance because of their natural curiosity. Don’t worry; the Emu is just nosy.

If raised as companion animals, emus can be taught to be friendly and curious rather than aggressive. However, there have been documented cases of Emu attacks, which are more common after the bird has been frightened, surprised, or provoked. As with any animal, but especially with huge creatures, it’s best to use caution around Emu instead of blindly trusting them. 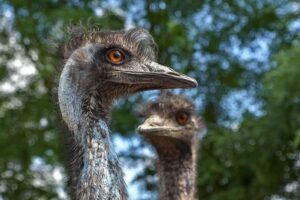 Emus will puff up their feathers before an assault to make themselves look bigger and more threatening. They will also strut about proudly while hissing at anyone who comes near. This is an unmistakable signal that the emu is irritated, so give it some space by slowly retreating.

What should you do if an emu chases you?

In most cases, an emu won’t try to scare you away if you come across one. Instead, they will likely unleash a few blows before deciding there is no real danger and retreating.

If an Emu ever comes after you, you should take cover behind some thick foliage or a large rock. The best course of action is to withdraw while maintaining silence slowly. In that case, Emu is far more likely to lose interest and leave.

Can a fight with an emu lead to death?

Mild fights have been documented between females seeking male mates, but overall, emu society is rather placid. While these brawls might get nasty, they usually don’t end in fatalities. Flocks of Emus often get along nicely when kept in captivity, and ferocious conflicts are not common.

Are emus dangerous as pets?

Emus are much more formidable foes than hamsters or rats simply because of their enormous size. If you compare Emus to medium to large canines, snakes, or other reptiles, you won’t find that big of a difference. Raised properly, they can make wonderful companion animals—warm, obedient, and not at all stupid.

Emus don’t like loud noises, but other than their natural predators—dingoes, wild canines, and crocodiles—they have nothing to be overly afraid of. It’s best not to try to startle an Emu away from you; instead, steadily back away and keep your cool until it loses interest.

How does emu protect itself?

The powerful legs that emus possess allow them to reach speeds of up to 30 mph (50 kph). One of their biggest predators is the dingo, and each animal has legs powerful enough to kill it.

When startled, emus jump back and kick at any nearby objects. Their lengthy, hairlike feathers are similarly difficult for predators to grasp. Due to its soft beak and vulnerable neck, an emu is unlikely to attack with its beak when threatened. As an alternative, emus raise their shoulders to protect their necks and heads

Has there been a human loss due to an emu attack?

There are a few reports claiming that deaths caused by emus are “rare.” However, no evidence exists that an Emu killed a human being. Instead, it’s more likely that these sources refer to cassowaries related to Emus.

Compared to Emus, Cassowaries are much more lethal, and some have even been responsible for human deaths. Nonetheless, most Emu-related injuries are minor scrapes and bruises. However, there have been 5 fatalities involving Emu birds and automobiles.

Rufous Hummingbird Migration (All You Need To Know)

Frigatebirds in Florida (Everything You Need To Know)

What is a Group of Quail Called And Why? (Name List)