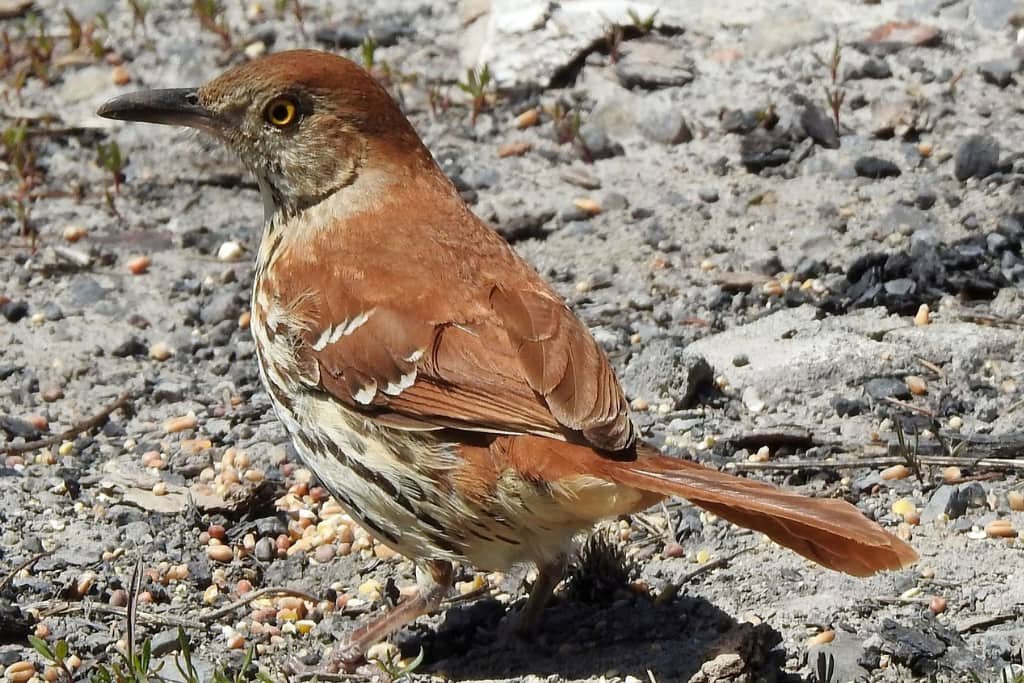 The Brown Thrasher (Toxostoma rufum) may appear to be an odd choice for Georgia’s state bird, given there are many more colorful songbirds to pick from. However, as you learn more about this unusual species and how it came to be named Georgia’s state bird, you’ll have a better understanding of the reasons behind this seemingly odd decision.

When was the Brown Thrasher designated as Georgia’s official bird?

The first effort to make the Brown Thrasher Georgia’s state bird was undertaken in 1928 by schoolchildren who voted for the bird as their top pick.

According to some reports, the red-headed woodpecker was also considered, but it was dropped due to objections from local tree owners. It’s unclear if the youngsters chose the Brown Thrasher on their own or were offered other alternatives to pick from. In any case, the State Federation of Women’s Clubs and the Atlanta Bird Club backed them up. A bill to make the Brown Thrasher Georgia’s state bird has introduced soon after, but it was not taken up at the time.

The Brown Thrasher’s induction as the official state bird was delayed partly because others argued that the quail should be the state bird, but this was criticized since many people didn’t feel comfortable killing and eating the state bird. As a result, the quail was named the state’s official game bird in a resolution passed on March 20, 1970. 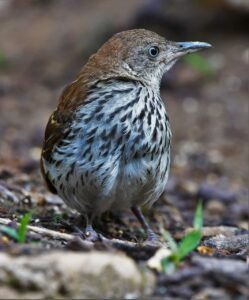 Why is the Brown Thrasher Georgia’s state bird?

What Is the Origin of the Brown Thrasher’s Name?

Once again, the origin of the name of this vibrant little bird appears to remain a mystery.

Some say he got his name from the way he twitches his tail, which is comparable to how a thresher removes the seeds from harvested grain stalks. Others believe the term came from the bird’s flailing and thrashing when seeking food under leaves and bushes, upturning leaves and dirt in pursuit of a delicious meal.

In any case, it appears that the Brown Thrasher got his name from his propensity to thrash around and stir up the environment around him. 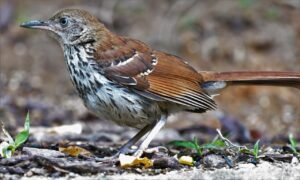 What Is the Brown Thrasher’s Appearance?

The Brown Thrasher is considered reclusive and frequents regions under trees and shrubs where he is likely well hidden, so catching sight of him may be tough. But don’t be fooled by his elusiveness into believing you should be looking for a little songbird.

The Brown Thrasher is a large bird 9 to 12 inches in length and has rusty brown feathers on his back and a pale belly with dark streaks. Two black and white wing bars, piercing yellow eyes, and a long, slightly curved bill distinguish the Brown Thrasher. His large tail feathers are held aloft by him. The male and female Brown Thrasher are visually similar.

What Is the Best Way to Attract Brown Thrashers to Your Yard?

Brown Thrashers don’t usually visit bird feeders, but they may dine beneath them if you provide mealworms to your backyard birds. Dried berries and fruit may also be attractive to them. However, providing the natural environment that the brown thrasher needs is the greatest method to attract him to your yard. To attract brown thrashers to your yard, try these tactics. 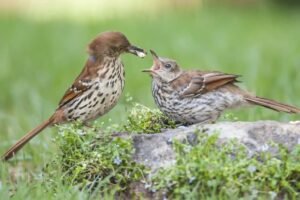 A brown thrasher feeding its young

What is the State Bird of North Carolina?

1 thought on “What is the State Bird of Georgia? Facts with Pictures”