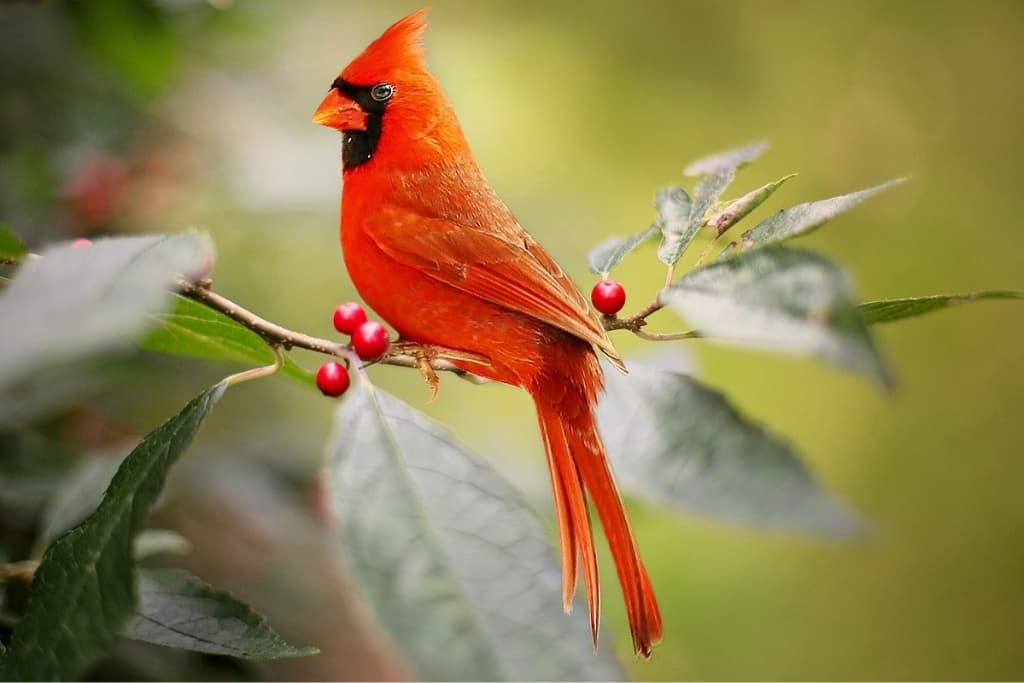 Cardinal Symbolism- Symbolism is a figurative sense of the deeper meaning some apparent events and signs represent. There are plenty of things in nature that act as symbols to something deeper and more important. However, we tend to miss them, thanks to our busy lifestyle. One such natural symbol is the birds.

Their ability to walk the land, swim the waters, and fly the skis makes them so unique. They are said to represent the connecting link between heaven and the earth, thanks to their ability to take flight. One such bird that we will be talking about here is the cardinal. Let’s have a look at its importance in different cultures.

Their symbolism is due to the bright red color they wear, and the sharp and resonant voice that they have. In Latin, cardinal means pivot. As a result, it marks a pivotal point in someone’s life. The cardinal bird represents passionate romance and fierce leadership. Cardinal symbolism is highly revered in Christianity. These birds represent unity and diversity. 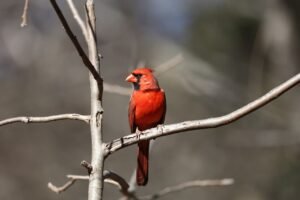 Cardinal birds are very devoted and monogamous lovers. Based on this characteristic, Native Americans believe that if a person crosses paths with a cardinal, they will meet the love of their life very soon. However, if you are already in a loving relationship, crossing paths with this bird will bring a renewed spark into your romantic life.

They also serve as a reminder of monogamy. There’s a legend in Native folklores that has given the cardinals honor of the messenger of romance. The legend says that there used to be a maiden with many great virtues. One day some cardinals came across her and got to know that she was lonely. They remembered the maiden and continued with their journey. As they moved ahead, they came across a brave Indian.

The cardinals befriended the Indian and tricked him into following them to the maiden. This way, the maiden, and the Indian met and found friendship, companionship, and love in each other.

Native Americans also believe there is a strong connection between the Cardinals and the number 12. This is because there are usually 12 eggs in a Cardinal’s nest. On top of that, you can see them throughout the years, that is, 12 months. According to them, if you cross paths with a cardinal, your good luck will strike within 12 hours, 12 days, by midnight, or by noon.

Catholic churches’ high officials wear bright red robes that resemble a Cardinal. Christians also believe that these birds represent Jesus Christ’s blood. On the other hand, some believe them to be a sign from a deceased loved one. This bird also serves as a   a reminder of the story from Matthew. In this story, God tells people not to worry about what they should eat, drink, or wear.

It points to the belief that God knows what we need and want. Everything will be provided to us if we seek Him. 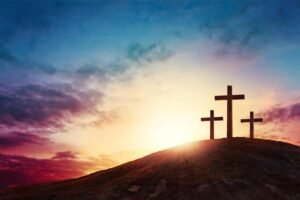 Celtic culture doesn’t have anything associated with the Cardinals.

Dreaming about Cardinals helps you feel the earthly limitations release you from its clutches. It means that you are getting free just like the freely flying Cardinal with no limitation or boundary limit. Ancient cultures have credited them to be the closest to heaven.

Dreaming of a Cardinal is equivalent to a favorable situation that you didn’t notice earlier. If you dream of a real cardinal, you will be shocked that something good is happening to you. Dreaming of the Cardinals represents your thoughts, spiritual enhancement, higher ideals, and enlightenment. They symbolize positive communication.

It means that something good is waiting for you on the horizon. It symbolizes the urge to follow your dreams and passions. Dreaming of a cardinal also means that a deceased loved one is trying to communicate with you. Dreaming them also represents hope, passion, and love.

What is the State Bird of North Carolina? (And Why with Pictures)

However, Cardinals are not only associated with positive things. Many events associated with them are also looked upon in a negative light. One such example is a Cardinal hitting your window. Many people believe it to be associated with someone’s death. If you find a Cardinal bird near a utility box, fire line, or firewood, it means it’s time to start making changes aggressively. Now you should start taking even more initiatives than usual.

If the Cardinal sits or lands near a water body, it is a sign that you start pursuing your passions and dreams. 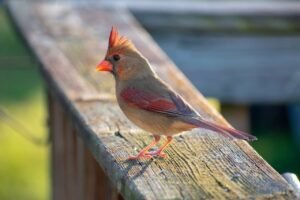 The Red Cardinal is closely associated with the Phoenix. In Egyptian mythology, the red Cardinal or a phoenix is a bird residing in the Arabian deserts. According to the Greeks, the Cardinal represents the sun. They believe that even the sun stops listening to their melody when they start singing.

Cherokee cultures also associate the Cardinal with the sun. One such myth believes that the first Cardinal was the sun’s daughter. Cardinals are also inked to weather predictions.

It represents love spiritually. Some myths and beliefs also associate Cardinals with the beginning of pregnancy. It is associated with becoming a new parent. This bird also represents the importance of staying true to ourselves and recognizing our inner powers and strengths. It spiritually signifies the fight with one’s insecurities. Cardinals also encourage you to be on the path of self-empowerment.

Cardinals are known to stand tall fighting all the difficulties. It is characterized by their non-migratory behavior during winters. As mentioned a few times earlier, they represent your love life, happiness, and energy. People call upon them when they are feeling low and depressed. This is because their bright colors represent the bright side of life.

If your totem animal is a Cardinal, then you may not blend all the time. This is because it is associated with uniqueness. It simply means that you have a personality that can’t be ignored. This totem animal also means that you come with a strong sense of honor and love for your home. You are an innovative and creative individual and never quit. On top of it, you are very territorial. 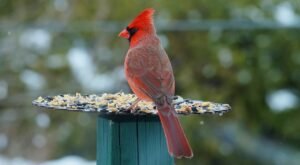 If you find Cardinal as your power animal, then you have an excellent guide for you if you going to a new setting or place. Plus, it also shows that you are pretty territorial. Cardinal helps if you suffer from emotional swings. These creatures also generate profound confidence within you. Not only that, but these bright red birds also help people to get along with the flow of life and help them adjust easily.

It also helps you to feel energized to pursue your dreams and goals.

Such a tattoo means love, hope, compassion, renewal, passion, and much more. It is quite common to see variations in Cardinal tattoos. Such tattoos, if done by an experienced tattoo artist, come out great. A realistic Cardinal tattoo represents your pride and territorial nature. However, it is a good idea to think deeply about this tattoo before getting it. Ask yourself the reason you want to get it. 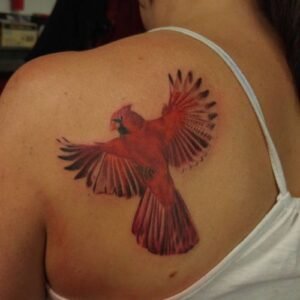